BREAKING   /
YOU ARE HERE:Home » Podcast Episode » Episode One Hundred And Sixty Five – On An Interview With Dr Paul Offit And Doubtful News Round-Up
Podcast Episode 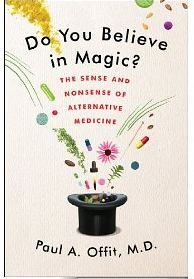 Welcome to Episode One Hundred and Sixty Five! This episode features a brief update on some of the following Doubtful News items, for Wednesday, 17th July 2013:

This is the week that it was announced that Jenny McCarthy was joining popular daytime television show “The View” in the USA. We can take some comfort that backlash about her appointment has not just come from science blogs and independent media sites, but also mainstream publications like Time and The New Yorker.

It’s also timely that Dr Paul A. Offit, the chief of the infectious diseases division of the Children’s Hospital of Philadelphia, has a newly released book “Do You Believe in Magic? The Sense and Nonsense of Alternative Medicine”. In it, he criticizes the negative impact that celebrities like Jenny McCarthy can have on the public understanding and support of good health and science. In addition, he offers a scathing exposé of the alternative medicine industry, revealing how even though some popular therapies are remarkably helpful due to the placebo response – many of them are ineffective, expensive, and even deadly.