BREAKING   /
YOU ARE HERE:Home » Podcast Episode » Episode One Hundred And Ninety Three – On The Unholy Trinity Downunder
Podcast Episode 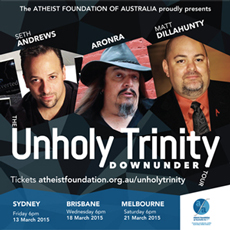 Matt Dillahunty, AronRa, and Seth Andrews take the stage to share stories, interact with a live audience (and with each other), and address some of the challenges and opportunities in the fight against non-reason.

Matt, AronRa, and Seth were once believers in God, the spiritual, and the supernatural. Today they are atheist activists who are known worldwide.

In this tongue-in-cheek-titled tour, Matt, AronRa, and Seth come together to share their stories, field your questions, have some fun, and encourage all within earshot to pursue and embrace a personal relationship with reality.

The tour will take place from the 12th to the 21st March 2015, and will include major events in Brisbane, Sydney, and Melbourne. More information at www.atheistfoundation.org.au/unholytrinity

Theme songs are P&P by Derek K. Miller of www.penmachine.com and Leap Second by Milton Mermikides, of www.miltonmermikides.com

Episode One Hundred and Ninety Two - On Art, Vaccinations, Comedy and Cancer