BREAKING   /
YOU ARE HERE:Home » Podcast Episode » Episode One Hundred And Forty Nine – On The Young Atheist’s Survival Guide And The Atheist Census
Podcast Episode 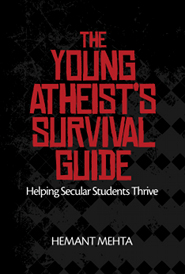 Firstly, an interview with Hemant Mehtah, where we talk about his new book, The Young Atheist’s Survival Guide: Helping Secular Students Thrive

Hemant Mehta, “The Friendly Atheist” blogger at patheos.com, discusses how to deal with teachers and administrators who promote faith in public schools, handle the peer pressure and ostracism that may come with being an outspoken atheist, and create successful student groups that encourage conversation over conversion.

The second interview is with Carlos A. Diaz, the President of Atheist Alliance International and the new Atheist Census. It’s a project to count and collect demographic information on the world’s atheists, and within seventeen hours of its release it was offline due to a denial of service attack. However, it is back up and already reaching over ten thousand responses… with many more on the way! You can add your details by heading to the Atheist Census.

The Atheist Alliance International’s vision is a secular world where public policy, scientific inquiry and education are not influenced by religious beliefs, but based upon sound reasoning, rationality and evidence.

Episode One Hundred And Fifty - On Fighting And Skepticism - With Dave Jones of Hiyaa! The Martial Arts Podcast