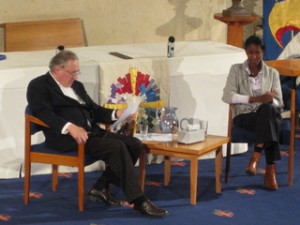 This episode would not be possible if it were not for the opportunity given to me by Christ Church Grammar School – particularly the Centre for Ethics and Reverend Canon Frank Sheehan and Teresa Scott – and St Hilda’s Anglican School for Girls.

This is an interview conducted on August 2nd, 2010 at Christ Church Grammar School, of Ayaan Hirsi Ali by Reverend Cannon Frank Sheehan.

After spending time as a parliamentarian in the Netherlands, Ayaan moved to a conservative Washington think tank. As both an activist and an academic, she writes and speaks about the problematic relationship between some forms of Islam and freedom of thought and expression as it has come to be accepted and treasured in the West. This has naturally led to hurt and bewilderment on both sides of the discussion.

Ayaan Hirsi Ali continues to pay a high price for her readiness to embrace liberty of thought as is evidenced by her need for protection. She gained enormous fame for her book Infidel (2007) and her most recent work Nomad. She has been the recipient of numerous awards and has been named as one of Time Magazine’s 100 most influential people.

This show is available on Zune, mp3 via Libsyn or iTunes. Visit www.tokenskeptic.org – I’d love to hear your feedback at tokenskeptic@gmail.com. Theme songs are ‘P&P’ by Derek K Miller at www.penmachine.com and ‘365’ by Milton Mermikides, at www.miltonmermikides.com.