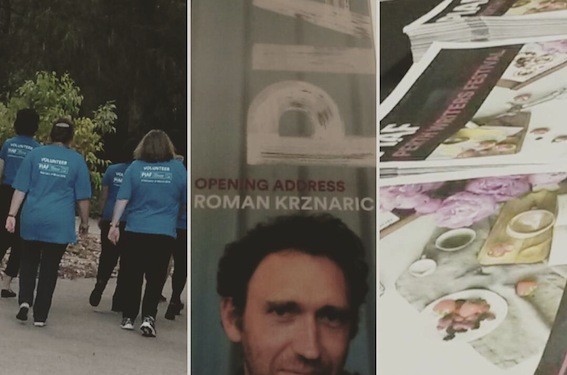 It’s all happening in town at the moment – the 2016 Perth Writers Festival! It’s a yearly celebration of writing, literature, non-fiction and the authors and ideas behind the covers of a massive range of genres.

Here’s a round-up of some of the interviews that I’ve conducted; they’ve been aired on local community radio station RTRFM as a part of ArtBeat and The Mag.

Sadly, more than a few of us have probably felt like we’ve lost a loved one before they’ve actually passed away and it’s a difficult thing to talk about. Not many people want to talk about topics like Alzheimer’s or Huntington’s disease, as they can be very scary topics.
But that’s where good books can help. Dr Lisa Genova has a Ph.D. in neuroscience and has a series of books on what life is like for people and families facing challenges such as autism or the possibility of Huntingtons – you might have seen the film based on one of her books, Still Alice.

Jasper Fforde is a prolific author, most known for a series starring detective Thursday Next, whose adventures in “BookWorld” reflect Fforde’s interest in literary allusion and the intricate craft of fiction.
He’s the first Perth Writer’s Festival author in the studio this morning, here to tell us about his new book, panels at the Perth Writers Festival and how he’s managed to create much loved works – and how he’s even got his very own Fforde Ffestival!

Evidence is a strange substance in modern Australian society and it’s a challenge to get difficult scientific concepts across to a diverse audience.
In 1996 Professor Peter Doherty’s pioneering research into how the immune system recognises virus-infected cells earned him the Nobel Prize for physiology and medicine. He became the fourth Australian to win the honour and has since written a number of books  the importance of living in an evidence-based reality – his newest one is The Knowledge Wars. He’s presenting at the Perth Writers Festival on science, climate change and more.

Cassandra Atherton has published eight books, including Trace and Exhumed, and judged numerous poetry awards.
She’s also held lectureships at The University of Melbourne, The University of Western Sydney and Deakin University, and interviewed a number of American intellectuals including Harold Bloom, Noam Chomsky, Stephen Greenblatt, and Howard Zinn. She’s presenting poetry at the Perth Writer’s Festival as a part of the celebrations of language and literature.

Paolo Bacigalupi is a popular science fiction author who addresses pressing issues of today by showing readers what not dealing with them might mean for tomorrow.
Dystopias where climate change, economic inequality and genetic engineering run rampant are the hallmarks of his work such as The Windup Girl – and The Water Knife – his latest – continues in the same vein.

Pip Lincolne is one of Australia’s best known bloggers, launching her writing at “meet me at mikes” and wrote the bestselling book of the same name. She teaches craft and blogging and is the craft contributor for Frankie magazine. Craft for the Soul – How to Make the Most of Your Creative Life is her latest book.
She’s doing a number of panels at this year’s Perth Writers Festival, on the art of crafting – and there’s even some tips on making your own “recipe for happiness”

For local author, Nicki Logan, romantic stories are a best-seller – she’s written 23 contemporary romance novels, specialising in nature-based romantic suspense.
She was the President of the Romance Writers of Australia and has presented to groups across Australia and in the UK – and now will be appearing at the Perth Writers Festival.

Theme songs “Cosgrove” by Pogo, from http://pogomix.net and “Leap Second” by Milton Mermikides, of www.miltonmermikides.com. Additional ambient music from Jukedeck – create your own at jukedeck.com