Episode One Hundred And Fifty Nine – On Psychiatric Tales, Science Tales And Faking A Moon Landing With Darryl Cunningham 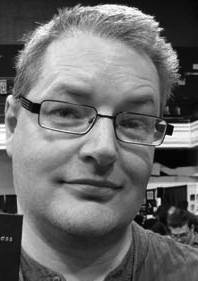 Today marks the end of World Immunisation Week and if there’s one thing I could recommend to people who are thinking of discussing the value of science and vaccination, it would be work like that created by Darryl Cunningham.

Darryl Cunningham went to Leeds College of Art and is a prolific cartoonist, sculptor and photographer. He has also worked as a health care assistant on an acute psychiatric ward which informed and inspired the thoughts and experiences which went into his best-selling Psychiatric Tales. As a review in The Independent says, “His deceptively simplistic cartoons married with an easy-read writing style announced him as a new talent on the graphic novel scene.”

When I was studying a unit in Abnormal Psychology for my postgraduate degree in Psychology, I first came across Darryl’s book Psychiatric Tales, which will be re-released later this year, expanded by some 40 pages and with some new chapters. I would highly recommend that book, not only for its investigation of conditions, but also the very engaging personal journey through depression that Darryl reveals in its pages.

Psychiactric Tales is available from Blank Slate in the UK and Bloomsbury in the US. His latest book is Science Tales: Lies, Hoaxes and Scams, is published by Myriad and is also released in the US as How to Fake A Moon Landing: Exploring The Myths of Science Denial by Abrams Comicarts.

For this interview, we discuss the process of creating art, the sources of his inspiration, how he researches topics such as homeopathy, conspiracy theories and pseudoscience, and what comic art brings to the table when it comes to challenging topics like mental illness.

Darryl blogs at Darryl Cunningham Investigates and Tweets at AcmeDarryl.

This show is available on Zune, mp3 via Libsyn or iTunes. Visit www.tokenskeptic.org; and I’d love to get your feedback at tokenskeptic@gmail.com.

Theme songs are P&P by Derek K Miller of www.penmachine.com and Leap Second by Milton Mermikides, ofwww.miltonmermikides.com. Please considering supporting the show via visiting Tokenskeptic.org and leaving positive reviews and ratings on iTunes.