A bonus for this episode! The start of the show is from Doubtful News, a ten- 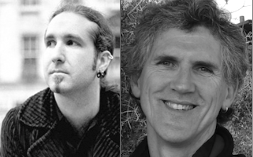 minute broadcast of some of the hit weird and wonderful stories that are in the media this month. Many thanks to Sharon Hill and check out the official site at http://doubtfulnews.com. Best of all, you’ll be able to see Sharon and many others in person at the forthcoming Amazing Meeting 2012 from July 12-15th!

Michael McRae is the author of Tribal Science: Brains, Beliefs and Bad Ideas, which has been released in Australia by the University of Queensland Press; the forthcoming U.S. edition is from Prometheus Books. He has worked in science, education, as an artist and is currently employed as a writer-editor at Australia’s CSIRO. He is also the writer behind the critical thinking videos for TechNyou, which can be found in six parts on YouTube and are part of a series on The Logic of Critical Thinking. His presentation at the conference that features in this episode is called “A Vital Divide: The Future Of Alternative Medicine in a Scientific Society”.

Dr Craig Cormick is a former science journalist and editor, and is widely published on research into the causes of public concerns into new technologies. He has travelled to all seven continents as a science communicator, including presenting at APEC and OECD workshops. Dr Cormick has published several books and authored the reports What You Really Need To Know About What The Public Really Thinks About GM Foods (2005) and Cloning Goes To The Movies (2006). He also recently conducted an interview on Risk Science Unplugged: Why do smart people believe dumb things with Dr Di Bowman about the social values that govern much public perception of risk, and how they affect the decisions people make.

This show is available on Zune, mp3 via Libsyn or iTunes. Visit www.tokenskeptic.org – and I’d love to get your feedback at tokenskeptic@gmail.com. Theme songs are “P&P” by Derek K Miller of www.penmachine.com and “Leap Second” by Milton Mermikides, of www.miltonmermikides.com. Please considering supporting the show via visiting Tokenskeptic.org.

Episode One Hundred And Twelve - On Atheism, Secularism And Rationality - Interview With Tanya Smith

Special Episode - On The Digital Cuttlefish