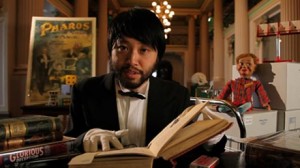 Mp3 of the show – downloadable here!

Tremendous thanks to both Simon Taylor for helping me secure this interview and Belinda Nicholson (who appeared in the 365 Days of Astronomy episode ‘The Stars Are Her Laboratory’ for lending me the astrophysics tea-room at the University of Melbourne to record it!

Please note – Simon has a GREAT new project, a skeptically-funny comic series called ‘Flim Flam’ – send in your support by sending in your pledge to get it happening!

Lawrence Leung is an Australian comedian, writer and director from Melbourne, Victoria. He is best known for his television series Lawrence Leung’s Choose Your Own Adventure.

If the truth is out there… then let’s look at the evidence! This is Lawrence Leung’s ‘Unbelievable‘.

He has performed in shows in London’s West End, at the Edinburgh Fringe festival, and toured around Australia extensively. This interview investigates the origins of the show, his history as a questioning comedian regarding interesting paranormal claims and what exactly was he up to when he was at Melbourne University (that you won’t find on Wikipedia)?? Special guest stars during this interview – occasional astrophysics students looking for a cup of tea.

Check out ‘Unbelievable’ on ABC1 from 9.30pm, Wednesday June 15th! Lawrence’s official website can be found at www.lawrenceleung.com.

Episode Seventy-Three - On The Nightingale Collaboration - Interview With Alan Henness