BREAKING   /
YOU ARE HERE:Home » Podcast Episode » Episode Fifty-Seven – On Miracle Cures And Changes To The ASA In The UK – Interview With Rhys Morgan
Podcast Episode

During my time at QEDCon, many people were talking about the changes that were pending with the Advertising Standards Authority (ASA). During an 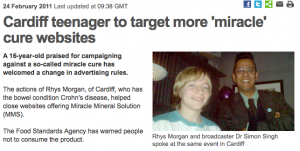 interview I conducted with Alan Henness of the Nightingale Collaboration (which will feature on Skepticality), their website countdown until the 1st of March was referenced.

How much hope do skeptics and pro-science activists in the UK hold for these changes really making a difference? What is the current situation faced by those who wish to have a say and are already fighting pseudoscience in regards to health claims online?

Since tomorrow is the 1st March, a great many pro-science activists are preparing to write into the ASA about pseudoscience and quackery perpetuated online. I got the chance to interview one such activist: Rhys Morgan, a teenage blogger who recently featured on BBC News Cardiff, after speaking at the Skeptics in the Pub during a night that also featured Simon Singh.

“From 1 March 2011, the ASA’s online remit now extends to cover companies’ own marketing claims on their own websites and in other non-paid for space they control. This landmark development brings enhanced consumer protection, particularly for children… The UK Code of Non-broadcast Advertising, which includes rules to make sure advertisements do not mislead, harm or offend, will be applied to all UK based company websites regardless of the sector or size of business or organisation.”

The ACCC against cancer-cure websites from Perth.

The Nightingale Collaboration Website – Take part in Focus of the Month

Simon Perry’s useful guide to submitting a complaint to the ASA – A Step By Step ASA Complaint.