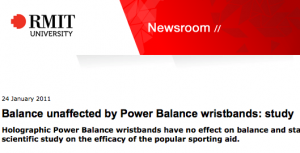 This is an additional, short interview for this week – which you can also hear on the Pseudo Scientists podcast, the show of the Young Australian Skeptics!

Due to traveling (which I’m about to do in about ten minutes after writing this blogpost), I didn’t have the chance to record an additional summation of the research – so here it is.

Many thanks to the interviewees and you can check out the media release that they mention on the RMIT website here – ‘Balance Unaffected By Power Balance Wristbands: Study’.

This is the abstract of the paper, ‘The effect of close proximity holographic wristbands on human balance and limits of stability: A randomised, placebo-controlled trial’:

Summary: The purpose of this study was to investigate the effect of holographic technology wristbands on human balance and stability performance. Forty-two individuals volunteered to participate in the study. A performance technology silicone wristband containing two holograms was utilised as the ‘Device’. A ‘placebo’ performance technology silicone wristband was utilised where the two holograms were removed and replaced with two stainless steel discs to the same dimensions and weight as the Device. Each participant was randomly allocated into two different testing protocol groups: Protocol 1 (Deviceebaselineeplacebo) and Protocol 2 (placeboebaselineeDevice). One week following the initial testing, the Protocol 1 group was tested under the conditions of Protocol 2, and vice versa, so that all participants were taken through both protocols. Results indicated that there was no statistically signi?cant mean change in balance performance brought about by either the placebo or the Device. Notably, the sample data indicated an overall decrease in balance and stability.
However, these mean changes are still within the bounds of what would be expected assuming the Device had no overall effect. The ?ndings of this study indicate that holographic technology wristbands have no effect on human balance and stability performance.

My notes and the questions I asked are as follows (many thanks to Barbara and Digital Cuttlefish for additional help!):

This particular journal doesn’t have a very high ‘impact factor’; when you look at the actual journal site, you’ll notice that they are aimed at massage therapists, chiros, applied kinesiologists, etc. Not that I have a problem with that at all, but it gives you an idea about the overall publication.

Questions asked (may vary slightly in the show):

1) Firstly – could you tell us a little about your respective qualifications and why you became interested in Power Balance bracelets in particular as a subject for a study?

2) Power Balance bracelet is being investigated as an ergogenic aid in this study – are such aids a particular concern in terms of their claims and what science says about them?

3) You chose, in your power analysis, a sample size which would detect “a moderate effect 80%” of the time.  Given the extravagant claims of some of the user testimonials, did you feel that this was a really conservative estimate?  Or were you aiming for accuracy?  (basically –  what were your reasons for choosing that effect size?)

4) How easy would it be to test some of the other claims that Power Balance make (which you mention in your conclusions)?  After doing your own testing on one aspect (balance), do you think it would be worthwhile?

5) Do you think the burden is not on the company to show that it *does* work, rather than on science to show it does not?

6) Were you at all surprised by the outcome?  Were you expecting to experimentally verify the effect, rather than to disprove it? [This one is for an American friend, who was a true believer up until the Australian news came out and they no longer wear theirs!]

Some Forthcoming Films On Token Skeptic - #QEDCon And Superstitions In Singapore