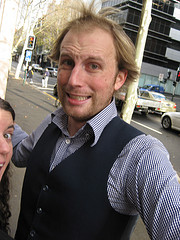 This is episode thirty! Work starts for me again this week, so to save some time, I’m putting this episode online a little earlier than usual. Since this interview focuses on a favourite topic of mine, Science Communication – I thought I’d plug an event by a fellow podcaster who will be doing something special for Australia’s Science Week. Here are the details!

On August 15, 2010, starting from 11am, at the Monash Science Centre, Clayton, Victoria – the Brains Matter podcast will be conducting an interview with one of Australia’s leading palaeontologists, Professor Pat Vickers-Rich, on the topic of “From Slime to Dinosaurs”. There’ll be an opportunity to ask questions on dinosaurs, and explore the Monash Science Centre. Facebook link to the event is here. The show will be streamed on the internet, so those who aren’t in Melbourne can still participate! Check out the Brains Matter site for more.

As I mentioned last show – there’s quite a few of us who have been nominated as finalists for the Big Blog Theory – that includes the Brains Matter podcast and Leslie Cannold as microbloggers on Twitter! Check out all the entries, including my own as Podblack Cat blog, and the Young Australian Skeptic’s Jack Scanlan, Dr Rachael Dunlop and Bec Crew’s Running Ponies and many more – at http://thebigblogtheory.com.au. I’d love to celebrate Australia’s Science Week by blogging across the country, so check us all out and nominate!

When I was in Sydney recently, I had the chance to talk to Daniel Keogh. He describes himself as an Ex-Hungry Beast idiot and a current ABC Science Show producer, who shares interesting stuff about science, politics, culture, and art. Like my friend Michael McRae, he has qualifications in science communication, having graduated from the Australian National University’s Centre for the Public Awareness of Science – where they were both Science Circus members!

Daniel has done some extremely funny and powerful presentations on scientific topics for ABC’s Hungry Beast TV show, including investigations on Gardasil for Guys, Scientology and even Zombies! His ‘Professor Funk’ on Youtube can be seen here: http://www.youtube.com/TheProfessorFunk.

He currently works at ABC studios in Ultimo, where we conducted the interview, and he’ll be touring the country for Australia’s Science Week with his show ‘Why We’re the Stupid Species’, details of which will be featured on the Science Week website – at http://www.scienceweek.gov.au/.

Libsyn 3 And 'Where Did All These Episodes Come From??'