BREAKING   /
YOU ARE HERE:Home » Podcast Episode » Token Skeptic Special Episode – D.A.A.S: My Part In Their Downfall – On The Road With The Doug Anthony Allstars
Podcast Episode

Token Skeptic Special Episode – D.A.A.S: My Part In Their Downfall – On The Road With The Doug Anthony Allstars 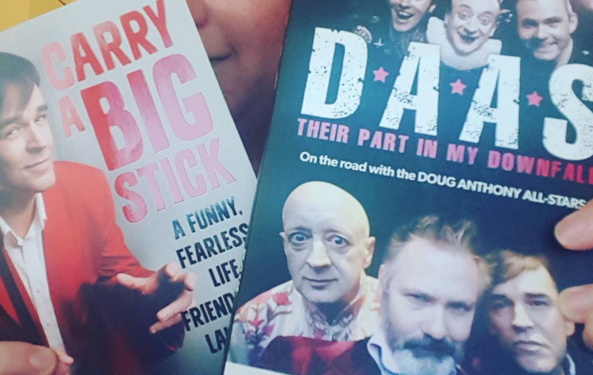 I have a new memoir in front of me, where part-way through it says the following:

“Here’s what I hate about memoirs, the penchant on the author’s part to dwell on the minutia of every aspect of their being.”

This isn’t that kind of memoir – it’s more like an account of being a part of numerous comedy tours run by a trio of Australian Hunter S. Thompsons, where Ralph Steadman has finally got a chance to get a word in edgewise.

It’s by Paul Livingston, a book called D.A.A.S: Their Part In My Downfall – On The Road With The Doug Anthony Allstars.

As Flacco on cult comedy show The Big Gig, Paul Livingston was fearless when it came to crossing the boundaries of good taste and is now touring as the guitarist for the new version of D.A.A.S. He joined me for this interview with fellow-D.A.A.S comedian Tim Ferguson.