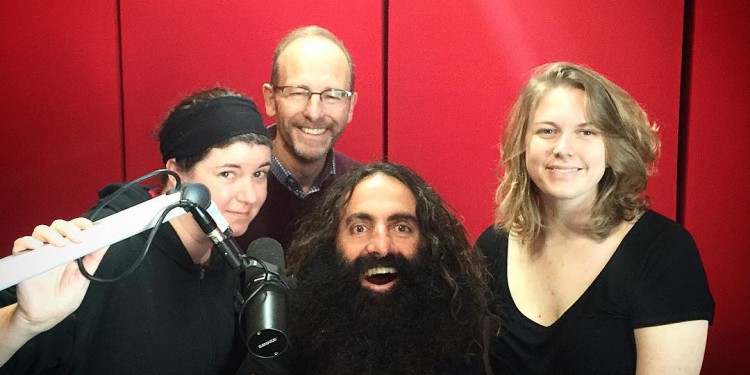 Welcome to episode #204 of the Token Skeptic podcast! Huge thanks to the organisers of National Science Week, Murdoch University and the SciTech folks for helping me get these interviews during the Perth Science Festival – microbiologist Siouxsie Wiles will be appearing live on the RTRFM Tuesday Mag show this week!

As always, you can support these shows and get behind-the-scenes content at www.patreon.com/kyliesturgess – for as little as $1!

The Naked Scientists are a team of scientists, doctors and communicators whose passion is to help the general public to understand and engage with the worlds of science, technology and medicine. It’s also an immensely popular radio show and podcast, which began even before the idea of ‘podcast’ was fully formed.

I spoke to Naked Scientists Chris Smith and Georgia Mills – about their show, science communication and the joys of science festivals.

Ben Britton is the face of Nat Geo Wild in Australia and New Zealand.

He’s passionate about wildlife, and believes strongly in conservation through education. He has appeared in a number of documentaries and on various television programs throughout his 20 years of professional experience in animal husbandry and wildlife conservation that have taken him across the world.

Finally, here’s some live audio from the ArtBeat show, from RTRFM! Hosted by Rhian Todhunter, guest hosted by me, and featuring Costa Georgiadis from SBS’s Costa’s Garden Odyssey and SciTech’s Director of Science Partnerships Dr Simon Carroll. Because this is RTRFM’s ArtBeat show – we talk a lot about how well art and science compliment each other.

Tremendous thanks to the radio station RTRFM, where these interviews have aired previously, especially producer Peter Barr and Rhian Todhunter.

Episode Two Hundred And Three - On After The Gold Rush, Skeptical Archaeology And Light For Riley