Episode One Hundred And Ninety Nine – On Skepticism 101 With John Scalzi, Daniel Midgley and Kylie Sturgess 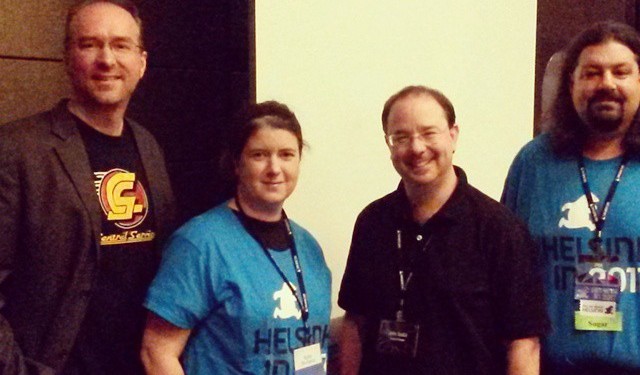 This is a very long, panel recording – with tremendous thanks to SwanCon and their organisers (and the fellow panelists, John and Daniel!) for allowing this to happen.

A 101 on skeptical thinking, from vaccine myths to cryptozoology, and why knowing more about the world is no hindrance to creative thinking and wonderment. If you’re into Asimov, Sagan, Scalzi or Sigler, get to know more about the philosophy behind many of their creations.

Well known for his Whatever! blog, John Scalzi has taken the speculative fiction world by storm. He has been the president of the SFWA for three years, creating havoc and chaos where ever he goes. He is best known for his Old Man’s War series, three novels of which have been nominated for the Hugo Award.  His novel Redshirts won the 2013 Hugo Award for Best Novel. He has written non-fiction books and columns on diverse topics such as finance, video games, films, astronomy, and writing, and served as a creative consultant for the TV series Stargate Universe.

Daniel Midgley is the resident linguist of RTRM, so he’s the go-to guy when people ask “Is go-to a word?” He teaches linguistics at Edith Cowan University and the University of Western Australia. He likes language history, language technology, and making up plausible words in Scrabble. He can beat anyone in Letterpress.

Kylie Sturgess does the Token Skeptic blog, podcast and writes these descriptions. There’s a M.Ed in the measurement of paranormal beliefs in there somewhere, but the most interesting thing about her is that she interviews people more interesting than herself. Which is how she prefers things to be. She writes a column called Curiouser and Curiouser over at the Skeptical Inquiry website.

Huge, tremendous thanks to everyone at SwanCon, especially superstar Guest Liason Sarah, and the Moderator of the panel, @prkaye!

Theme songs are P & P by Derek K. Miller of www.penmachine.com and Leap Second by Milton Mermikides, of www.miltonmermikides.com.

AtheistAus Podcast - Now A New Show On SoundCloud and iTunes