BREAKING   /
YOU ARE HERE:Home » Podcast Episode » Episode One Hundred And Sixty Eight – On The Australian Tour Of Prof. Brian Cox
Podcast Episode

Episode One Hundred And Sixty Eight – On The Australian Tour Of Prof. Brian Cox 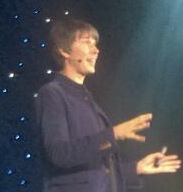 Welcome to a special episode celebrating National Science Week in Australia! I’ve been busy as anything with the #IFLSLive event over in Sydney and due to technical issues this is a little later than planned – but here’s (finally!) the full interview I conducted with Professor Brian Cox at the start of the week, with many thanks to Gia Milinovich for her awesome help.

I probably don’t need to say much to introduce him – Professor Brian Cox, OBE is an English particle physicist, a Royal Society University Research Fellow. He is a member of the High Energy Physics group at the University of Manchester, and works on the ATLAS experiment at the Large Hadron Collider (LHC) at CERN, near Geneva, Switzerland.  Professor Cox is best known to the public as the presenter of a number of science programmes for the BBC, boosting the popularity of subjects such as astronomy and physics. He also had some fame in the 1990s as the keyboard player for the pop band D:Ream.

Referenced in the interview:

Theme songs are “P&P” by Derek K. Miller of www.penmachine.com and “Leap Second” by Milton Mermikides, of  www.miltonmermikides.com. Song used with kind permission in this episode: “Pale Blue Dot” by Ice Core Scientist.

Episode One Hundred And Sixty Seven – On Being Chronically Skeptical

Episode One Hundred And Sixty Nine - On Memes, Blogs And Videos: How Social Media Has Transformed The Way We Communicate Science