BREAKING   /
YOU ARE HERE:Home » Podcast Episode » Episode One Hundred And Fifty Five – On Reclaiming A Secular Australia – Interview With Sean Faircloth
Podcast Episode 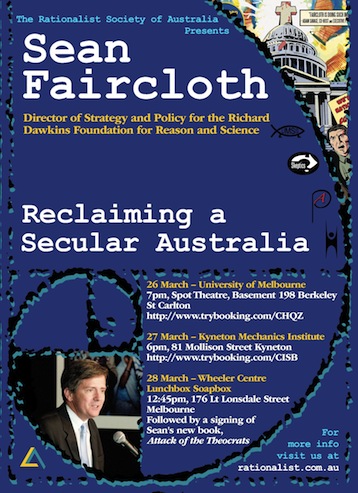 Get ready Australia and New Zealand – Sean Faircloth is on his way!

Sean Faircloth was hired as the Secular Coalition for America’s Executive Director in June of 2009 and served a decade in the Maine State Legislature. In his last term he was elected the Majority Whip by his colleagues and was an accomplished legislator, successfully spearheading over thirty pieces of legislation, particularly involving children’s issues and justice system reform.

Sean Faircloth is a strong advocate of the separation of church and state and has received many awards of recognition including the 2006 Legislator of the Year Award from the Maine People’s Alliance, the 2005 Excellence in Advocacy Award from the American Heart Association’s Northeast Affiliate.

In 2009 Sean became the executive director of the Secular Coalition for America, advocating for separation of church and state, and for greater acceptance of nontheistic viewpoints in American life. In September 2011 he became the Director of Strategy and Policy for the Richard Dawkins Foundation for Reason and Science and was the opening speaker for Dawkins’ book tour.

His first book published by Pitchstone Press, Attack of the Theocrats! How the Religious Right Harms Us All – and What We Can Do About It was released in February 2012.

Further details of times, venue, and and attendance prices will be posted soon – Check the NZ Association of Rationalists and Humanists website for more details.

Check the Rationalist Society of Australia website for more details.