BREAKING   /
YOU ARE HERE:Home » Podcast Episode » Episode One Hundred And Thirty Six – On Atheist Books 101 With Embiggen Books
Podcast Episode 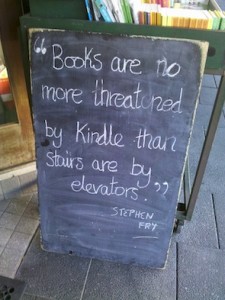 “Books are no more threatened by Kindle than stairs are by elevators.” Stephen Fry.

Embiggen Books, the fantastic rationalist bookstore in Melbourne, has a brand new revamped website and a science-based bookclub – and naturally, some of the best reads in the southern hemisphere!

For this episode, Warren Bonett and I investigate how books can help you understand atheism, humanism and secularism, and what are some of the best new reads on the scene.

– HUGE thanks to Gerry and suggestions for new podcast to the site or to the email address at tokenskeptic at gmail.
– Hoaxilla Podcast: Happy 100 episodes!
– Congratulations on your marriage, Dr Karen Stollznow and Matthew Baxter!
– Monster Talk Podcast: Parsec Fact Behind the Fiction winners!
– ScienceRewired – still selling tickets and student discounts and more available, head to www.sciencerewired.org.

Books we discuss this episode:

The Australian Book of Atheism by Warren Bonett
Religion Explained: The Evolutionary Origins of Religious Thought by Pascal Boyer
The Big Questions: Philosophy by Simon Blackburn
The Big Question: God by Mark Vernon
Mormon History 101 by Dan Barker
God Said “Ha!” by Julia Sweeney
The Very Short Introduction: Humanism by Stephen Law
The Very Short Introduction: Atheism by Julian Baggini
The Very Short Introduction: Ethics by Simon Blackburn
The Case of the Pope: Vatican Accountability for Human Rights Abuse by Geoffrey Robertson QC
Does My Head Look Big In This? by Randa Abdel-Fattah
The Young Atheist’s Handbook by Alom Shaha
The Book of Rachael by Leslie Cannold
36 Arguments for the Existence of God and Betraying Spinoza by Rebecca Newberger Goldstein
It’s Not About The Sex (My Ass!) by Joanne Hanks and Steve Cuno
The Missionary Position: Mother Teresa in Theory and Practice by Christopher Hitchens
Hope Endures by Colette Livermore
Faitheist: How an Atheist Found Common Ground with the Religious by Chris Stedman
Attack Of The Unsinkable Rubber Ducks by Christopher Brookmyre
Adams Versus God by Phillip Adams
State of Wonder by Ann Patchett
The Geek Manifesto: Why Science Matters by Mark Henderson
Why Are You Atheists So Angry? 99 Things That Piss Off the Godless by Greta Christina
The Moral Landscape by Sam Harris

Summary? Follow the example of Christopher Hitchens and read EVERYTHING.

Theme songs are by Kevin McLeod, called “Aces High” on www.incompetech.com and “P&P” by Derek K. Miller of www.penmachine.com and “Leap Second” by Milton Mermikides, of www.miltonmermikides.com.

I'm Going To Exercise This Off French Toast