BREAKING   /
YOU ARE HERE:Home » Podcast Episode » Episode One Hundred And Twenty Four – On The Geek Manifesto (Again) – Interview With Mark Henderson
Podcast Episode 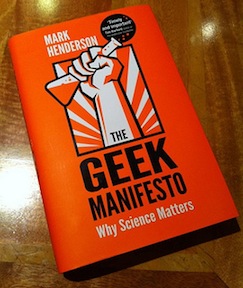 Back in 2011, after the first QEDCon, I interviewed Mark Henderson for Token Skeptic Episode #55 – while attending the Westminster Skeptics in the pub. Now, over a year later, his book The Geek Manifesto: Why Science Matters is out!

Whether we want to improve education or cut crime, to enhance public health or to generate clean energy, science is critical. Yet politics and public life too often occupy a science-free zone.
In the UK, ministers ignore, and even sack, scientific advisers who offer inconvenient evidence. The NHS spends taxpayers’ money on sugar pills it knows won’t work, while public funding for research that would boost the economy is cut. Groundless media scares, taken up by politicians who should know better, poison public debate on vaccines and climate change, GM crops and nuclear power.

Something is stirring among those curious kids who always preferred sci-fi to celebrity magazines. As the success of Brian Cox and Ben Goldacre shows, geeks have stopped apologising for an obsession with asking how and why, and are starting to stand up for science instead.

In this agenda-setting book, Mark Henderson builds a powerful case that science should be much more central than it is to government and the wider national conversation – and a global one as well. The Geek Manifesto shows how people with a love of science can get political, to create a force our leaders can no longer afford to ignore.

Mark Henderson is Head of Communications at the Wellcome Trust, a global charitable foundation dedicated to achieving extraordinary improvements in human and animal health by supporting the brightest minds in biomedical research and the medical humanities. Before joining the Trust in January 2012, Mark was Science Editor of The Times, where he built a reputation as one of Britain’s foremost science journalists and commentators.

Here’s where you download a sneak preview of the book!

This show is available on Zune, mp3 via Libsyn or iTunes. Visit www.tokenskeptic.org – and I’d love to get your feedback at tokenskeptic@gmail.com. Additional instrumental music for this episode: Coffee By Numbers, by Marian Call, from her album Something Fierce.

Theme songs are “P&P” by Derek K Miller of www.penmachine.com and “Leap Second” by Milton Mermikides, of www.miltonmermikides.com. Please considering supporting the show via visiting Tokenskeptic.org.

Episode One Hundred And Twenty Three - On Not So A.C.E - Investigating Accelerated Christian Education With Jonny Scaramanga

The Scope Of Skepticism: Interviews, Essays And Observations From The Token Skeptic Podcast