BREAKING   /
YOU ARE HERE:Home » Podcast Episode » Episode One Hundred And Eleven – On How Now You See Her – Gia Milinovich And Sonya Pemberton
Podcast Episode

On the advent of International Women’s Day, a double-interview show with two very interesting professionals who work on the big (film, 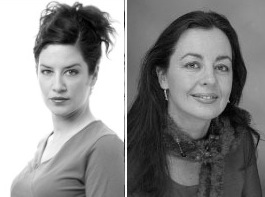 documentary) and small (television, online) screens – for science and technology!

Gia Milinovich is an American film blogger and producer; her career in television has involved working on mostly science and technology shows. She produces websites, writes and lives in London. She has presented TV programmes such as Channel 4’s Demolition Day (2003–06), as well as Sky Sports, Nickelodeon and BBC Radio 5 Live shows dating back to 1995  She produced the ‘behind the scenes’ website for the film Sunshine, the film 28 Weeks Later and was part of the technical support team for the BBC programme Electric Dreams in 2009.

Sonya Pemberton is an Australian documentary writer, director and executive producer. She has written and directed in television, specialiaing in science documentary for the international market. She has been three times honoured with the prestigious Eureka Prize for Science Journalism and was responsible for the Science, Natural History, Indigenous, Religion & Ethics, and Education departments, commissioning over 300 hours of factual programs. The documentary Immortal won Best Science and Nature at Jackson Hole, 2011. In 2011, Sonya joined forces with Cordell Jigsaw Productions to form a joint venture company, Genepool Productions.

This show is available on Zune, mp3 via Libsyn or iTunes. Visit www.tokenskeptic.org – and I’d love to get your feedback at tokenskeptic@gmail.com. Theme songs are “P&P” by Derek K Miller of www.penmachine.com and “Leap Second” by Milton Mermikides, of  www.miltonmermikides.com. Please considering supporting the show via visiting Tokenskeptic.

Booklaunch Of The Skeptical Blog Anthology - And Skeps In The City Gameshow!

Episode One Hundred And Twelve - On Atheism, Secularism And Rationality - Interview With Tanya Smith