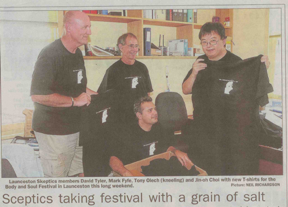 Direct link to mp3 audio of the episode here!

A few news items before the show starts – I’m still organising plans to be in Melbourne over the next two months or so, but I’ll post confirmed dates on the Token Skeptic site about anything I’m doing. It will be great to catch up with people there, so I’ll let you know!

A few people contacted me about the Milton Mermikides interview with George Hrab which featured in the ‘Token Skeptic best of episode’ and it was originally shown on Episode #24. The full interview is on the Geologic Podcast (Episode #176 – The Trebuchet Virtual Liner Notes).

Now there’s a transcription of the entire interview / breakdown of the album, on Milton Mermikide’s site – Trebuchet: The Interview – Geo and Milt Geek Out. Milton is, of course, responsible for the 365 outro on the podcast and you can subscribe to his Posterous.com blog for more of his work.

Speaking of podcast episodes – the review of Tim Minchin’s concert was well received by listeners and the Perth Atheists are planning a meetup for this Sunday, to watch the live broadcast of the Sydney show together at the High Wycombe Tavern in High Wycombe.

For an additional episode this week for the Token Skeptic podcast – this show features two-interviews in one!

David Tyler, a member of the Launceston Skeptics on their stall at the Body and Soul Festival in Tasmania, and Jason Brown on the forthcoming Australian SkeptiCamp – the very first, called Sydney SkeptiCamp.

David Tyler, a member of the Launceston Skeptics, tells us about a successful stall to promote Science and Rational Thinking at the recent Body and Soul Festival. It’s something they called an “Island of Reason in a Sea of Rainbows and Unicorns”.

Their hope was to get attendees to have a chat and perhaps take away some of the material they put together. They designed a special webpage to mark our attendance (www.bodynsoulfestival.launcestonskeptics.com) which has links to free resources that promote Science and Rational Thinking.

They were well received by most attendees and the local media with some great coverage from our local paper with two articles so far, from over the weekend.

Apparently that was the only coverage that they gave to the festival! The number of attendees doubled for their Skeptics in the Pub from what they previously expected and they hope to do more projects later this year.

Secondly – Jason Brown, the creator of The Skepticator.com website and Sydney Atheists, is starting the very first Australian SkeptiCamp in Sydney! It will be called Sydney SkeptiCamp and he discusses the origins, ideas and planning of the event.

Head to Jason’s site at http://www.mycolleaguesareidiots.com or Tweetstream at http://twitter.com/drunkenmadman.

Episode Sixty-Three - On Reaching Out Reasonably At QEDCon